I remember being taught how an airplane generates lift with its wings in my high school physics class. At the time, I didn’t realise how bad the explanation was (Flight Revisited, and How wings really work). It’s as bad as the “train-track” explanation [1][2][3] of why a ray of light bends when it travels through different optically dense mediums [4][5]. Anyway, we’re usually presented with the following diagrams of a wing and its airflow:

The airflows may look fine, but they’re not correct. On the following diagram, the 4 numbers are for 4 main things that are wrong with the diagram:

Fortunately, nowadays, there are many detailed YouTube videos of air flowing across various wing designs and angle of attacks. Smoke lines are used to visualise the airflow around the wing and are quite different to those drawn in many diagrams. These videos were hard to find back in high school:

Let’s now make some (more correct?) observations about how the airflow progresses across the wing, step by step, as shown in the second video: 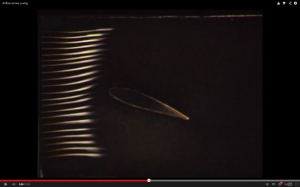 In this first shot, the streamlines are approaching the wing. The wing has an angle of attack and the wing’s cross-section is symmetrical. Note that the upward angle of the streamlines (upwash) is caused by the air’s interaction with the wing (air is a compressible fluid). 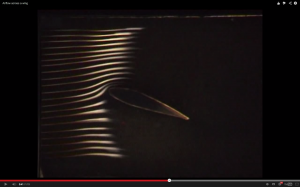 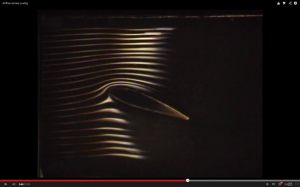 In this third shot, the streamlines above the wing have made it past the leading edge and are now made to occupy an increasing volume of space behind the wing. I am not sure if the increase in volume causes the air pressure to drop, thereby increasing the air’s flow rate by “sucking” the air past the wing’s trailing edge to equalise the difference in air pressures. The streamlines below the wing are made to occupy a decreasing volume of space in front of the wing. Again, I am not sure if this decrease in volume causes the air pressure to increase, thereby decreasing the air’s flow rate. Because the wing physically separates the lower pressure (above the wing) from the higher pressure (below the wing), the different air pressures can only be equalised when their airflows reach the wing’s trailing edge. The lower and higher air pressures can flow around the wing’s trailing edges to equalise the air pressure. However, because the air is being blown across the wing, we don’t see much of this effect. (Remember: On a real plane, the wing is forced through the air by the engines.) 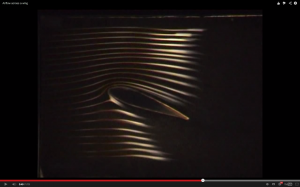 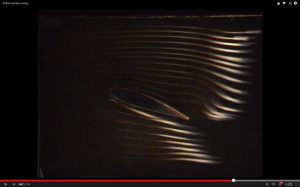 In this fifth shot, the streamlines above the wing are now past the wing’s trailing edge. At this point, we can see that the original air has been accelerated downwards by the wing. By the same token, the airflow causes the wing to be accelerated upwards, creating lift. 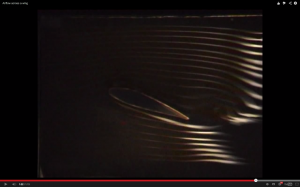 In this sixth shot, the streamlines after the wing’s trailing edge continue to flow downwards. There is a bit of turbulence in the rejoining of the streamlines from above and below the wing. 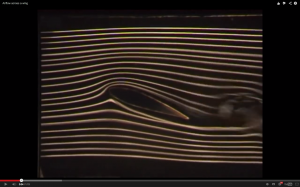 In this overall shot, continuous streamlines have been used to show the overall airflow around the wing. Here we can see the downward acceleration of the air above and below the wing, contributing to the upwards acceleration of the wing. However, we must be aware that these wind tunnel demonstrations force air over the wing and that the air can only flow between between the wing and sides of the wind tunnel. The sides of the wind tunnel do interact with the airflow and attenuates the (downward) airflow created by the wing (which does not happen when a plane is flown through the spacious sky).

Models are used everywhere in science to help explain how things work. Some models are better, some models will be refined, and some models will be superseded by better models. Examples of models you’ve been taught in school include: the Bohr model of the atom, wave model of light, and classical mechanics. These models help explain the obvious behaviours quite well, but as you delve deeper into the internal workings of the phenomena, the models start to breakdown and look more and more like elaborate lies. The big problem with the explanation I was given of how a wing generates lift is that the airflow diagrams did not reflect reality; not even for simple wing designs and approaching airflow.

Schools and textbooks might feel inclined to give such a bad explanation for how lift is generated because the truth is far too complex to explain, or the bad explanation is passed down from each generation of teachers. The dynamic nature of how air interacts with a wing is quite hard to explain using words and pictures, but much easier with video and live demonstrations. With digital education so ubiquitous, perhaps such “hard” concepts can be explained with the help of videos and interactive computer simulations. The explanations might not be perfect, but at least the students will see the truth for themselves.

Ok, so my two cents again… Airflow over a wing is actually kinda tricky. If you google around, you’ll quickly find that there’s several ideas floating around the internet, along with criticisms and debates on the details, and then there’s math-heavy explanations that do nothing for the layperson who expects some decent hand-waving argument without lots of numbers. It seems that those who do understand lift are resigned to assuming that the rest of us will never get it unless we are prepared to learn the intricacies of viscosity, compressibility, Reynolds numbers, ideas like the Kutta condition and of course math voodoo like partial differentiation. But most of us don’t want to actually try and model lift, we just want to know how it works.

The equal transit time thing is indeed a crock, although it’s a very simple concept to explain to kids, certainly simpler than the reality that I’m going to attempt to describe here. So, what actually happens? If you want a long-winded explanation that’s as good as I could find for a layman, check this out:
http://home.comcast.net/~clipper-108/lift.pdf
If you want something more detailed, this site is really good too:
http://www.av8n.com/how/htm/airfoils.html

If they’re too long, here’s something of a “Too Long; Didn’t Read” (TL;DR) summary:

First off, in the simplest sense, Newton’s laws apply. There are theories that say the lift is simply caused by air on the underside being deflected down, and they are rightly criticized – but only because they don’t take into account all of the air. The air below the wing is indeed pushed downward, but there’s even more air above the wing that is pulled downward. The wing pushes a bunch of air downward, from both above and below, and the air in return pushes the wing up. Action, reaction. Newton at his clearest.

So what’s this about faster airflow above the wing than below? Why does that happen? It’s caused by the low-pressure zone above the wing as it pushes the air down. Newton is still correct; this faster airflow stuff is just the (sorta complicated) mechanism by which all that air gets drawn down from above and the wing generates lift.

Let’s start by thinking of holding the back of a tablespoon up to a flow of water from a tap. The water sticks to the tablespoon rather than just falling past. It’s called the Coanda effect, if you want to look it up, and air flowing past a wing does the same. If you think of a wing as a flat plate pointing directly into the airflow, it just slices through. But if it’s pointing up a little (positive angle of attack), because the air flowing over the top sticks, the wing draws that air down. But if it’s drawn down, it’d leave a hole above it, right..? And we can’t have that. Nature abhors a vacuum. The creation of the low-pressure zone  draws more air in from above, and all that air being pulled down means the wing gets pulled up in return.

But… why does the airspeed above the wing increase? Why isn’t it just going down, why is it going from the front of the wing to the back faster? (It isn’t the Venturi effect – google around and you’ll find that this is another theory that doesn’t quite stack up). This is where something called “circulation” comes in. If I may borrow a comparison from that second link above: you can blow out a candle from a bit of a distance, but have you ever tried to suck one out? When you blow, you give a stream of air a bit of momentum, a velocity, and that “lump” of air wants to keep heading in that direction. Newton again. But when you suck, all you do is create a low-pressure zone. Air will rush in from all directions, not from the front preferentially.

But at the back it’s different. By the time the formerly undisturbed air passes around the wing and reaches the trailing edge, it’s moving downward. It doesn’t rush up around the trailing edge of the wing over to the top because it’s got downward momentum and the trailing edge is sharp, preventing that spoon effect that might pull it back up. It’s being blown away downward. (Google the Kutta condition if you like) It’s much easier for the air coming in at the front to accelerate a little and fill this low-pressure zone than for the air coming out the back to do a U-turn and head back up from underneath.

So what does this have to do with “circulation”? At the front, the air is slowed as it enters the high-pressure region under the wing, and some that you’d think would go underneath is instead sucked over the top into that low-pressure zone. But at the back, the air doesn’t do a similar thing and curve around the trailing edge up into the low-pressure zone above; it keeps going down. It’s been “blown” down at the back, but at the front where it’s “sucked” in, it can come from any direction, including underneath. In effect, it’s like a constant circulation of air around the wing, with the air coming forward under the wing, up around the leading edge and then back over the top. Hence “circulation”.

It should be noted that the circulation isn’t somehow magically producing the lift – it’s the air being forced down that’s producing lift, it’s just that this motion of the air over the wing is the mechanism by which the air is forced down. And there’s a lot of air being forced down. The high pressure zone below the wing pushes down on air further below, and the low pressure zone above sucks a huge volume of air downward from well above the wing. And of course, the amount of force required to accelerate all that air downward corresponds to the net upward force on the wing from the higher pressure underneath it and the lower pressure above.

So then there’s other details like why the leading edge is blunt, wing camber, and what happens when the angle of attack goes up too much and you get turbulent flow and stall, and thick wing sections and all sorts of different airfoil designs, and then at high subsonic speeds you start to get compressibility in the air… but that’s another story.